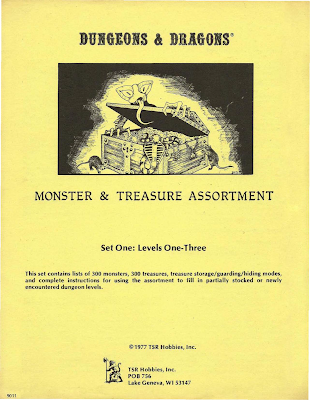 Released somewhere around the mid-point of 1977, TSR's Monster & Treasure Assortment - Set One: Levels One-Three presents a series of lists that the DM can use to create adventures on the fly, or to aid them in dungeon preparation. The bulk of the work for this product seems to have been done by Gary Gygax's then teenage son Ernie, as he related on Facebook:


"I worked on the creation alone. Sitting after school at my Dad's desk at 723 Williams St, with percentile dice, paper and pencil. I was to roll up randomly everything (using the original boxed set) and change it as I saw fit to make it fun. Dad was of the belief that the customer seemed to not be like us so much in that they really loved pre-made materials. I also had to create at least one new monster in one case the Water Weird."

The product begins by explaining its purpose, with the author suggesting that dungeon levels should first be populated with several special monsters, while the other areas of that level can then be filled with selections from the lists that follow.  On average, the author states that 20% of dungeon rooms should have monsters, and that 20% of those monsters should have no treasure, so that players won't always know whether there is loot to be found.

For each pf dungeon levels 1 to 3 there is a list of sample encounters numbered from 1 to 100.  It's all pretty standard low-level D&D fare, although I'll get into some more detail below as to which monsters are new here, or getting stats for the first time.  It's interesting to note that while the monsters' hit points are listed, their Hit Dice aren't; it's a pretty glaring omission, I feel.  There's also an entry for Attack Level, which shows what the creature needs to roll to hit Armor Class 9.  It's something of a precursor to THAC0, the "To Hit Armor Class 0" short-hand that was used a little bit in AD&D 1st edition and became a core rule in 2nd edition.

The treasures also have a 100-entry list for each dungeon level. These are a lot more bare bones than the monster lists, mostly being either an amount of coins, some gems and jewelry, or a magic item. None of these is new or particularly inspired, but could be useful for determining the rough level of treasures that the Gygaxes were using in their dungeons.  Also, you know this is still definitely based on original D&D, because there's a potion of diminuation there, rather than AD&D's potion of diminution.

To supplement the trasure lists there are some random tables that show how they are stored and protected: one table for containers, one for traps, and to show how the treasure is hidden.  The idea that most treasures will be hidden hasn't really come up yet that I can recall, so this could be the first time it's being brought forth as a core part of dungeon design.

The following are the monsters that I believe are getting stats here for the first time.  I could be incorrect about some of these.

That's it, I think. It's also probable that a bunch of the monsters, those that first appeared in Supplement II: Blackmoor, may have stats that match up closer to the Monster Manual than their original versions. As I recall on my first pass through, those were the ones that Gygax revised the most, and all evidence points to him working on the Monster Manual at around this time.

It's also interesting to note that paladins appear on these lists using the level titles for fighters, e.g. Paladin Swordsman, Warrior Paladin, etc.  They were still very much at this point being treated as a subset of the fighter, much more so than they were in AD&D.

To round things off, there's an example monster/treasure matrix provided for the first level of a dungeon that I may use as part of the Ultimate Sandbox:

First Dungeon Level
Overall, I do kind of question the usefulness of this product, as it doesn't seem all that better than the kind of thing a competent DM could come up with on the fly on their own.  It's perhaps more useful for novice DMs, as a way for them to get a feel for the type and number of monsters that should appear on certain dungeon levels, as well as how much treasure they should have.  If I do end up using this, it will probably be in conjunction with the geomorphs to make a dungeon that contains the sample encounters from those.
Posted by Nathan P. Mahney at 2:18 AM