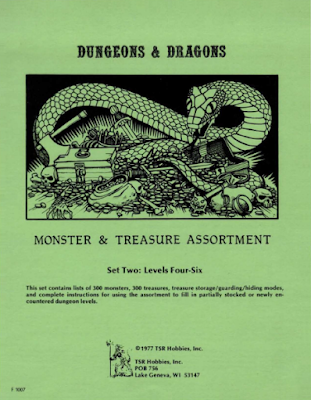 Around this time in late 1977 the second Monster & Treasure Assortment was released.  (Note that this date is very approximate; I've used a number of sources to try to pinpoint release dates, but there are a bunch of products that just don't have that info out there.)  As with the first installment (which I covered here), it presents a number of pre-prepared encounters and treasures to help the DM stock their dungeons more quickly.
The instruction text at the beginning is exactly reproduced from Set One, including the example that uses introductory monsters from the first set.  As with the previous product, each dungeon level covered (in this case levels 4 to 6) has a list of 100 encounters and 100 treasures.  Most of them are standard fare, but there are a number of monsters that are appearing here for the first time ever.  I'll list them below.
Most of that list above will go on to appear in the Basic and Expert boxed sets written by Tom Moldvay and Dave Cook, while being excluded from AD&D.  The Monster & Treasure Assortments were reportedly put together by Ernie Gygax, so it's possible he created these monsters or was inspired to include them based on earlier games.  Wherever they came from, it's odd that they never made the jump to AD&D.  The AD&D Monster Manual would have been written around the same time as this product, so perhaps these monsters hadn't been created by the time it was finished.
Also of note is that the Monster and Treasure Assortments include a line for each monster showing what saving throw they use.  OD&D is fairly nebulous on the matter, just telling you to use the appropriate class and level equivalent to the monster's Hit Dice.  This is, I believe, the first product that gives concrete information on monster saving throws.
Finally, I want to mention the entry for number appearing.  As with saving throws, OD&D doesn't really tell you how many monsters should be encountered in a dungeon; the Number Appearing entry in that version of the game is meant to apply to wilderness encounters.  The Monster & Treasure Assortment could be used as a guide to determine the proper number to be encountered.  Take Orcs, for instance.  In OD&D, they will be encountered by the hundreds, at least in the wilderness.  In the Assortment, they are encountered as follows: 2-5 on level 1; 3-12 on level 2; 4-24 on level 3; 10-40 on level 4; not encountered after that.  There's no pattern to follow, unfortunately, but it's the closest that the original game ever gets to providing guidance on the matter.
I also just noticed that the blurb on the back of the product mentions some products that were never released.  Apparently TSR planned a fourth set of dungeon geomorphs (ruins), another set of outdoor geomorphs (castle/fortress), and a set of geomorphs for use with miniature figures.  None of these ever saw the light of day.  I'd assume this is because the other geomorphs didn't sell all that well, but I honestly don't know.
I'll leave you with this image from Set Two, which shows some poor bastard being eaten by an Umber Hulk.  My favourite thing about early D&D art is its dedication to showing adventurers meeting grisly fates.  It's definitely something that the more modern art is lacking. 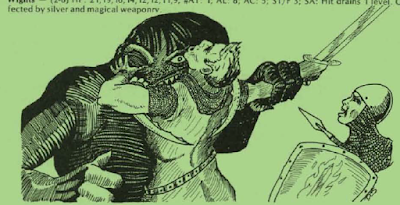