GIANT SKUNK: Unsurprisingly, giant skunks have appeared in just one place in D&D's history to this point: the wilderness encounter tables in Supplement III: Eldritch Wizardry.  Those tables are the source for all manner of seemingly harmless non-monsters that have inexplicably ended up in the Monster Manual.  You have to admire Gary's dedication in including everything.

Giant skunks are quite tough, and as expected their musk spray is their most potent weapon.  Seriously, you don't want to be hit by it.  It doesn't just smell bad, it does all kinds of nasty things to your character.  If you fail a save vs. poison you'll be blinded for 1-8 hours, and suffer a 50% drop in Strength and Dexterity for 2-8 turns.  That's not the worst of it: any cloth material hit by the musk rots, and that includes magic items that fail a save.  Players are not known for respecting the combat capabilities of real-world animals, but once a skunk disintegrates their cloak of displacement that's bound to change.  (I'm wondering if a bag of holding counts as cloth.  It would be pretty funny for a spatial disruption to destroy the entire party just because a skunk sprayed them.)

SLITHERING TRACKER: Slithering trackers debuted in The Strategic Review #5.  Their entry here is near-identical to the original.  Slithering trackers are transparent blobs that tend to follow their victims, wait for them to sleep, then suck out their "plasma".  They're very difficult to spot, and they secrete a substance that can paralyse their victim; not something a solo adventurer wants to tangle with.  The only change made to this monster is with how difficult it is to hit; originally it was treated as Armor Class 1 unless the attacker could detect invisible objects.  (I can only assume that, in my theoretical campaign, the Adventurer's Guild eventually teaches people how to spot them better.) 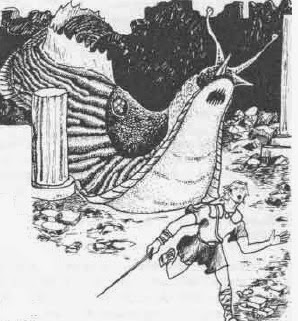 Slugs of the giant variety first appeared in Supplement I: Greyhawk, and just as with slithering trackers above, Gary has left them mostly as is.  They're incredibly tough, having 12 Hit Dice, and are completely immune to blunt weapons.  Their most potent attack is an acid spit that defies both the regular attack roll/Armor Class system, and saving throws.  Instead it has a base 50% chance of hitting, increased or decreased based on range.  (They're always inaccurate on the first spit, though, with a 10% chance to hit; no word on whether that one gets modified by range.)  Unfortunately, a big omission has been ported over from the original entry: the acid spit has no damage listed!  It's a pretty big oversight.  My instinct is for it to work like dragon breath, with damage equaling the slug's hit point total, and a save for half damage.