Rangers: Rangers are an odd case, in that they debuted in an issue of The Strategic Review rather than in one of the official supplements.  The class was not originally designed by Gary, so it will be interesting to see how far he goes in altering it.

Rangers are described here as "a sub-class of fighter who are adept at woodcraft, tracking, scouting, and infiltration and spying."  In OD&D they were restricted to Lawful alignment, but in AD&D they can be Lawful  Good, Neutral Good or Chaotic Good.  (Yet more evidence that OD&D Law/Chaos are equivalent to AD&D Good/Evil).

The ability score requirement for becoming a ranger in OD&D were quite strict (Strength 9+, Intelligence & Wisdom 12+, and Constitution 15+).  They're not much more stringent in AD&D: Str 13+, Int 13+, Wis 14+ and Con 15+.  It's probably easier to become a ranger in AD&D, even though higher stats are needed, because of the more favourable ability score generation methods.  In OD&D, rangers had Strength as a prime requisite, but an AD&D ranger needs scores of 15+ in Strength, Intelligence and Wisdom to gain the experience bonus.  Although, now that I look closer, OD&D rangers didn;t get an XP bonus for having a high Strength.  Instead they had a weird ability that gave them 4 XP for every 3 XP earned, which basically amounted to a 25% bonus.  This ability was lost once the ranger reached 8th level, but it's not present in AD&D at all.

Rangers still receive 2 Hit Dice at 1st level, but the die they use to roll for hit points remains a d8 (the fighter and paladin have both upgraded to d10 in AD&D).  They keep rolling for hit points until 11th level though, whereas the other fighter-types stop at 9th.

As in OD&D, rangers gain their level as a damage bonus when fighting "giant-class" creatures.  This was originally very vaguely defined, with a note that said "Kobolds - Giants".  I always figured this meant all of the monstrous humanoid types, but it's the sort of loose definition that can cause problems.  In AD&D, it's a rigidly defined list: bugbears, ettins, giants, gnolls, goblins, hobgoblins, kobolds, ogres, ogre magi, orcs, and trolls.

Rangers are difficult to surprise, as they were in OD&D.  They also gain surprise more often, which might be a new ability.

The rangers' tracking ability has had a few minor tweaks, but remains mostly unaltered.

The rangers' spellcasting abilities may be the biggest change to the class.  In AD&D, rangers can start casting druid spells at level 8, and magic-user spells at level 9.  In OD&D, rangers cast cleric spells rather than druid, as the druid class had yet to be created at that point.  The spell levels attainable are also much higher in AD&D.

That rangers gain a bunch of special followers at high level is the same as it was in OD&D, but it seems that the relevant tables are in the Dungeon Masters Guide, so I can't do a comparison as yet.

Rangers have a small number of restrictions, that are much the same as they were in OD&D.  They must remain of Good alignment, or lose their powers (in OD&D this was Lawful).  They can't hire men-at-arms or servants until they reach 8th level.  They can only own as much stuff as they can carry. No more than three rangers can work together (in OD&D, this number was two).

There have been some changes to the level titles for rangers.  I'll list the OD&D titles followed by the AD&D ones.


On the whole, I prefer the OD&D titles. Courser sounds too much like a horse.  I can see getting rid of the "ranger" title, though.  It's weird having the class name and level title be the same.

As I recall, in my original speculation about the ranger class I decided to give rangers pretty much the same background that they have in Tolkien: fighters with ancestry from some great, lost kingdom. Given that I'm tying Middle-Earth into the distant past of Oerth, I could even make said ancestry the same as it was inLord of the Rings.  Gary hasn't changed the class very much, so there's no need for me to go back on that idea just yet.
Posted by Nathan P. Mahney at 5:15 AM 2 comments:

Fighters: Fighters have changed very little from OD&D.  They're still the best class in battle, able to use their strength more effectively and wield all weapons and armour.  As before, a 9th level fighter can establish his own stronghold and collect taxes.  In OD&D the figure was set at 10gp per inhabitant per year.  In AD&D, it's 7sp per month, which comes to 84sp per year - equivalent to about 4 gp per year. Looks like AD&D fighters are taking a pay cut.  Probably the most significant change for Fighters is the jump from using a d8 for hit points to a d10.  There's honestly not a lot else to say.  It's the baseline class, and Gary didn't see the need to change them.

Paladins: The first thing to be noted here is that it's a lot harder to become a paladin than it was in OD&D.  All you needed there (assuming you were Lawful in alignment) was a Charisma of 17.  In AD&D, not only do you need the 17 Charisma, but you also need a Strength of 12, an Intelligence of 9, a Wisdom of 13 and a Constitution of 9.  I looked at some other guy's math, and if you roll your stats using 3d6 in order there's a 1-in-1000 chance that you'll get a paladin.  Good luck with that!

The new alignment system has, of course, necessitated a change to the restrictions on paladins.   In OD&D they had to be Lawful, and now they must be Lawful Good.  (This may have been introduced with the five-point alignment system from The Strategic Review, but I can't really remember).  A paladin who acts against their alignment will suffer a penalty, but an Evil act is punished more strictly than a Chaotic one.  If a paladin commits a Chaotic act, he can atone by doing penance as prescribed by a high-level cleric.  An evil act will cause the paladin to lose all their abilities irrevocably, with no takesies backsies.  (In OD&D, a Chaotic act was treated as an Evil one is here.)

As far as special abilities go, their +2 to all saving throws remains, as does their immunity to all diseases and their ability to detect evil at will.  Their "lay on hands" ability works exactly as it did in OD&D, but their ability to cure disease in others has been a bit nerfed: before it could be used daily, but now it can only be used once per week (with extra uses at higher levels).

In OD&D, 8th level paladins gained the nebulous ability to "dispel evil" simply by ordering it hence.  That's gone in AD&D, but it's been replaced by a continuous aura of protection from evil, which now that I look at it is pretty badass.  It's an ability I usually forget about, but the fact that it's always on makes this one of the paladin's most potent.

The paladin's warhorse is now explicitly said to appear as if by magic.  It's otherwise the same, except that in OD&D you could interpret the rules as saying that the horse has all the same abilities as its paladin master.  There's no such ambiguous wording here, unfortunately.

Unless I've missed something in the OD&D rulebooks, I believe that this is the first time that higher-level paladins get the abilities to turn undead and cast cleric spells (although perhaps the "dispel" ability I mentioned above was meant to represent turning).

Paladins are still restricted in the number of magic items they can own, and the amount of treasure they can amass.  The numbers here are much the same as they were in OD&D.

Paladins weren't given their own level titles in OD&D, so here are the newly created ones for AD&D: 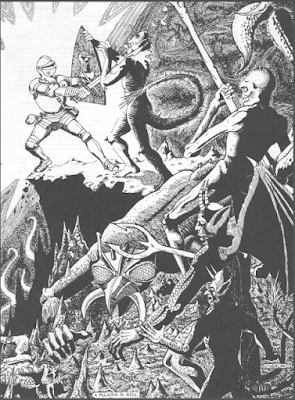 Posted by Nathan P. Mahney at 5:22 AM No comments: