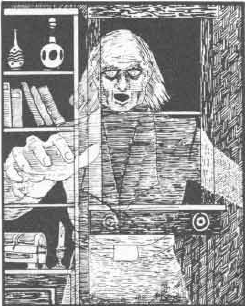 SPECTRE: Spectres debuted all the way back in D&D Vol. 2: Monsters & Treasure, as part of the original crop of undead.  The original entry was pretty sparse, though, and we get a lot of good fluffy detail here.  It's first said here that spectres are undead humans that exist primarily on the Negative Material Plane.  They also hate sunlight, as "daylight makes them powerless".  This powerlessness isn't specified, but I would rule them incapable of attack in any form.
They get the standard raft of undead immunities: sleep, charm, hold, cold, poison and paralysis.  To balance that they're now vulnerable to holy water, and a raise dead spell can destroy them if they fail a save vs. spells.
In original D&D, it was said that "Men-types" killed by a spectre return as a spectre.  Here it is specified that only humans are affected in this way, and they now return as only half-strength spectres.  It's not exactly a contradiction, but I do wonder at Gary's rationale here.  Why can't dwarves, elves and halflings be undead?
And yes, finally, Spectres still drain two experience levels with every successful hit in combat.  Yes, it's a bastard, but I've made my stance on level-drain perfectly clear before.  In a plot-based game the depends on progression of the characters, it's a nuisance that holds up the game.  In a sandbox game where exploration is the main focus, it's one more obstacle to overcome.  Suck it up and get on with the adventuring.