Bards have appeared in D&D before this (in an article from The Strategic Review #6 by a Doug Schwegman), as a standard character class.  They were a sort of combination fighter/magic-user/thief, with some charm and lore abilities on top of that.  The AD&D version of the bard fits that description as well, but it's there that the similarities end.  I'm not sure why Gary changed the class so much, but there's a telling line right at the start: "As this character class subsumes the functions of two other classes, fighters and thieves, and tops them off with magical abilities, it is often not allowed by Dungeon Masters".  It's likely that Gary objected to the combination of powers granted by this class, and instead of the fairly streamlined class from the article, we got the much less friendly version seen here.

To qualify, a character must be human or half-elf, and have the following minimum scores: Str 15, Dex 15, Con 10, Int 12, Wis 15 and Cha 15.  Good luck rolling those scores legitimately (although there are certain legit methods we'll see in the Dungeon Masters Guide that could produce such a character without too much difficulty).  The OD&D bard needed "above average" scores in Strength, Intelligence and Charisma, and the class was open to elves, dwarves and hobbits.

Now we come to the biggest difference: the AD&D bard doesn't begin as a bard.  Instead, they must start as a Fighter.  Somewhere between 5th and 8th level they must change class, becoming a 1st-level Thief.  Again, somewhere between 5th and 9th level, the character must change class again, into a druid.  Once they're progressing as a druid, they are considered bards, and gain the requisite abilities.  It's a hell of a process, and it results in a more powerful character than the OD&D version.  For starters, they get full thief abilities for their thief level, rather than the half-level abilities of the OD&D bard.  They also end up with a shitload of hit points: 1d10 per fighter level, with 1d6 per druid level on top of that.  I have to wonder what Gary was thinking.  (Oh yeah, they also get all the druid abilities as they advance in that class too.)

The switch from magic-user spells in OD&D to druid spells in AD&D is an odd one.  It fits well with the explicitly celtic, druidic nature of the class as it is at this point, but it clashes somewhat with the minstrel/trickster that the class would become.

As a bard gains druid levels, they progress through the various "bardic colleges": Fochlucan, Mac-Fuirmidh, Doss, Canaith, Cli, Anstruth, Ollamh and finally Magna-Alumnae.  None of these are really explained, except to say that bards won't associate with those from a lesser college until they reach Magna-Alumnae and become teachers of a sort.  These colleges were all present in OD&D, except for Magna Alumnae.  I'm not sure what their purpose is, except perhaps to limit the number of bards getting about in the same adventuring party.

As for the bardic abilities they get on top of the rest, they are as follows.  They can inspire their allies with some poetry, granting a bonus to attack, damage and morale.  They can negate song-based attacks like those from harpies, and soothe and quiet shriekers.  They can use their music to fascinate and charm monsters.  Finally, they have a large knowledge of legends and lore, and can use it to identify certain magic items.

All told, it seems like a really strong class, perhaps over-powered, but I'd love to see one in actual play.  The mechanical weirdness of the whole thing seems a bit off, though, and to me suggests a lot of the regrettable future developments that Gary will come up with in Unearthed Arcana.  I wish he'd just stuck with the class from The Strategic Review, to be honest.

As for the Ultimate Sandbox campaign, the differences between the two present a problem.  Normally I might just shrug my shoulders and ignore differences between editions, but this is a significant one.  The notable difference is that the AD&D bard seems much more exclusive than the one in OD&D, racially and statistically.  It also seems to tie more specifically to the Druids, as they cast the same spells and have the same powers.  So I wonder if the original bards were Druidic at all?  Perhaps they came about as an organisation (albeit a short-lived one) inspired by the Druidic Bards, an imitation rather than the real thing?  Joining that organisation was not so hard, far less so than becoming a bard in the ultra-secretive Druidic sect.  The alternative is to have an off-shoot Druidic sect that had less stringent requirements, but I think I prefer the former.

This is the graph as it appears in the PHB. 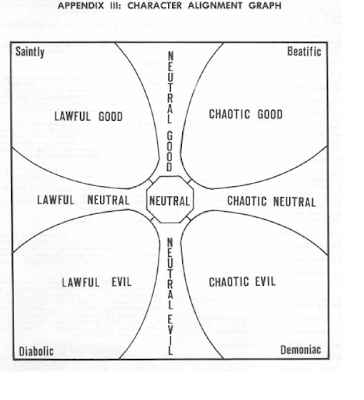 There's no text accompanying this chart, so its intended purpose isn't entirely clear.  It's probably meant for charting the alignments of the various players in the campaign, in case they drift out of their current alignment.  I don't see much other use for it, though I like the four descriptors for paragons of the four most extreme alignments.  Some similar charts have appeared in OD&D, and those featured a lot of the various monsters scattered around as examples.
Posted by Nathan P. Mahney at 12:30 AM