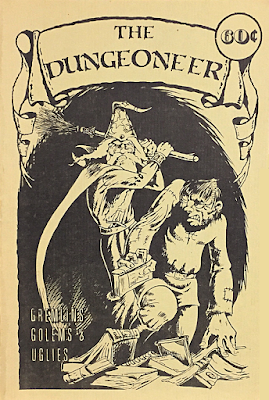 Dropping around the same time as TSR's The Dragon #1, the first issue of The Dungeoneer was pretty much entirely put together by one person, then 19-year-old Jennell Jaquays. Jaquays goes on to become one of the seminal D&D writers and designers of the late 70s and early 80s, mostly working with Judges Guild. The Dungeoneer is eventually bought by Judges Guild, and merged with the Judges Guild Journal.  Judges Guild products were sort of semi-official, so I'm going to start covering them on the blog. I don't have a copy of Dungeoneer #1 to work with, but I do have the The Dungeoneer Compendium, which collects the first six issues. Using that and an on-line index I think I can cover most of it's contents.

"Fatigue Factors" by Jennell Jaquays: This article provides a more detailed fatigue system than D&D's very generous "one turn of rest for every five turns of movement". Every PC has a number of Fatigue Factors equal to the average of their Strength and Constitution x 10.  Everything from moving around to fighting to taking damage to casting spells fatigues you. Spells especially: magic-users casting high-level spells could drop dead from the strain. Clerics get it a little easier, as it's assumed that their deity helps out a little. Characters take penalties to attack rolls, damage and Dexterity when they've dropped to 66% and 50% fatigue, and fall unconscious at 30%. If they somehow hit 0, they're dead.

A lot of early D&D articles are focused on increasing the realism of the game, and this is certainly in that tradition. It's a lot of work, though, and to me it looks like it would take much of the fun and adventuring spirit out of the game, as PC's would be forced to hole up and rest rather frequently. I prefer to have them forging ahead rather than resting or retreating. I doubt I'll implement any fatigue rules for my campaign, and if I do they certainly won't be as extensive and punishing as these.

"The Arcane Elders" by J. Mark Hendricks: This is chapter 1 of a serialised novel that runs through the first (I believe) six issues of The Dungeoneer.  Hendricks gives new meaning to the phrase purple prose, never using one simple word when three arcane ones are available. Here's a sample: "So dark was the sky, one would accuse the monarch of light as having dipt his crimson ship beneath the world's edge aeons ago, and only occasionally did this queen of luminescence peer from about her cloud-curtained chamber to observe those below conspiring dark deeds." It certainly has some evocative phrasing and imagery, but it can be a tough read. The story's about an old wizard named Valmous who sends his apprentice off to learn from the Arcane Elders.  The apprentice, Rohcyl, escapes just as his master is killed by six barbarians. I'm not sure if this will be of relevance to anything (maybe in Judges Guild's Wilderlands of High Fantasy setting) but I'll keep an eye on it.

"The Monster Matrix": This presents three new monsters as detailed below.

I'll use these monsters, but probably not as a part of the Greyhawk setting. Eventually I'd like to expand things to include the Judges Guild material, and when I do that I'll include them as part of the Wilderlands setting.

"F'Chelrak's Tomb" by Jennell Jaquays: An adventure for higher-level adventurers in the tomb of a dead wizard (this seems to be one of the most popular themes at this point). I had some trouble figuring out how all of this fit together: Jaquays' penchant for using both the horizontal and vertical planes is already evident, and the text is pretty badly organised. The adventure itself is gonzo, with all sorts of crazy stuff that can mess up your character. Probably the most notable are the magic statues, which can have all sorts of effects when exposed, including splitting your character into two separate people. What about a pendant that allows you to polymorph into an ooze, but leaves you permanently in that form the tenth time you use it? Or a 100' deep pit that's filled with gas that explodes for 20d6 damage when you fall in? This adventure is deadly, and weird, and very much of its time, but I kind of love it.

We don't learn much about F'Chelrak, except that he was an evil wizard (13th level when he died), and before he died he placed his soul into an urn with magic jar. The runes on the front door warning people away were written in Lawful, which suggests his enemies sealed him in there... But then again he's Lawful Evil, so he could have written it himself. Not sure why he'd be warning people away when he wants a new body, but it could be reverse psychology.

I'll definitely place this adventure in the Wilderlands setting, though I can't be sure where it should go until I've read more Judges Guild material.

"The Goodies Bag": This recurring feature is for new magic items, two of which are introduced below.
Posted by Nathan P. Mahney at 9:02 AM