The D&D basic set was the beginning of a new era for the game, one where TSR was upping their production values and shooting for wider mass market success.  A big part of that process was the development of Advanced Dungeons & Dragons, but prior to that it was decided that the game needed a more introductory rule-set.  These rules - which only cover player character levels 1 to 3 - were written by John Eric Holmes, a professor of neurology, and are mostly a revision of the original Dungeons & Dragons booklets (with some stuff thrown in from Supplement I: Greyhawk).

Initially, the boxed set came with a rules booklet, a copy of Dungeon Geomorphs Set One, a copy of Monster & Treasure Assortment Set One, and a set of dice.  Later printings swapped out the Geomorphs and Monster & Treasure Assortment for the module B1 In Search of the Unknown, and much later that was replaced by B2 The Keep on the Borderlands.  There were also the infamous numbered cardboard chits, which replaced the dice when TSR were having a shortage.

I already covered this product, starting all the way back here.  Check those posts out for a more in-depth look at the product.  (Although maybe ignore the stuff at the beginning about resetting the rules via an adventurer's guild, because I'm not planning on doing that kind of "rules progression" campaign, at least not in the way I was originally.)  Here I'm just going to quickly run through the new additions to the game, mostly to remind myself of the things I need to incorporate for the Ultimate Sandbox.

There are a bunch of minor changes to spells, but here I'm only listing the more significant ones.

STUFF FOR ME TO ADD TO THE ULTIMATE SANDBOX 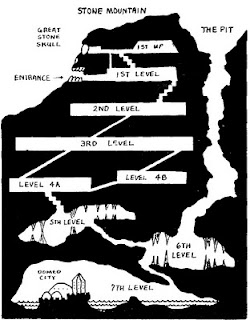