Into the Great Outdoors: The section on wilderness adventures has a short bit about the use of the map from Outdoor Survival (I wonder which of Gygax or Arneson used it first?).  Following that is a short selection of random encounter tables; the most notable thing on those is the separation between Trolls and True Trolls.  There are references to True Trolls in the earliest D&D books, but no indication as to what the difference is between them.  I suspect it's the regeneration ability, but that's just my own gut instinct.

After some wilderness movement rates for various vehicles, and a chart showing the value of various goods and how likely they are to disappear on an overland journey, Arneson gets into the processes of determining where the monsters live.  And boy, it is involved.  There are rules for how many monsters are in the lair when the PCs arrive, and how far away the wanderes are.  Population growth is dealt with, as is migration during Spring.  Arneson actually says that the DM should play out any battles when a monster group migrates into an area that's already inhabited.  A lot of stuff in this section suggests that Arneson spent significant time playing out campaign events on his own, assuming that he used these guidelines himself.

There's also a section to help a DM draw their own map, which is done by random determination of terrain.  Like a lot of stuff in this booklet, this gets really fiddly: there are rules for determining how many hills are in a hex, and how many miles wide each hill is.  I guess this sort of detail can be important if you're running things more like a wargame, but it's well outside of my own tastes.

Blackmoor Dungeons: This is the main attraction for me here.  Included are ten levels from the Blackmoor Dungeons, as well as two networks of tunnels between levels, and some smaller levels labelled as "Glendower"; how all of these fit together is a bit of a mystery.  Inevitably, these materials are disappointing.  The notes are sparse and not particularly evocative: as with Greyhawk, these early megadungeons lived in the minds and games of their creators, and can never truly be captured in published form.  The maps are very nice though.  I'll include a page of maps and a page of notes to give you a sample. 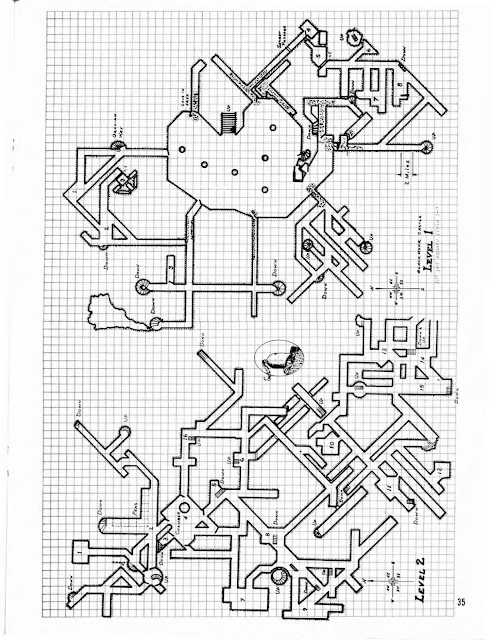 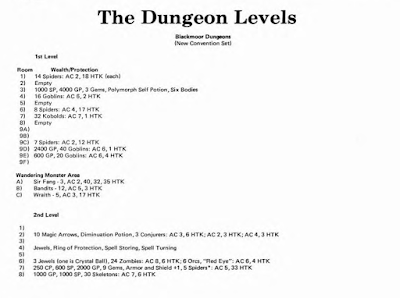 Pretty much all of the keyed entries are like those above, with little more than monster numbers and treasure.  Three features are described in more detail by Arneson: the Orcian Way, Sir Fang, and the Elves who currently hold the castle above.

The Orcian Way is a stairwell that descends from level 1 all the way down to level 10, where hundreds of orcs, ghouls, ogres, and a couple of balrogs await.  Once players are on the stairwell there are only two ways out. One is to fight the monsters at the bottom, and the other is through a trapdoor at the top that magically teleports anyone entering it to the middle of Blackmoor Bay, where they are likely to drown or be eaten by the Great Kraken of the Bay.  (Arneson may have been more whimsical about it, but I'm starting to suspect that he was far more of a Killer DM than Gygax.)

Sir Fang was originally Sir Fant, a player character, until he fell prey to a vampire. Now he roams the dungeons upper levels, and has control of thousands of rats that he uses as his spies.  He's said to be a "Vampire x5", although I'm not entirely sure what that would mean.  Five times the amount of Hit Dice?  It's hard to say without knowing exactly how Arneson's rules worked.

The castle above the dungeons is currently ruled by elves, who test entrants to the dungeons by making them drink holy water, and guard the dungeon exits from evildoers with garden hoses filled with holy water. (I did say Arneson was whimsical.)  Their whole set-up sounds kind of like a carny, where they try to sell things to the PCs, and have turnstiles installed on the dungeon entrance, and prizes for anyone who makes it back out.  It's a weird tone; a little silly and anachronistic for my tastes, but it's obvious that everyone was having fun with it.

Magic Swords & Matrix: Arneson gives some sample magic swords, and his rules for randomly determining their abilities.  As in OD&D, swords have more special abilities than other weapon types.  Most of what's here is implementing the same ideas as in OD&D, but the rules themselves are sometimes quite different.

The main difference that jumped out at me is that there are fighter's swords, magician's swords, and holy swords (presumably usable by clerics, although I don't think it's specified).  This is a big departure from D&D, where the ability to use magic swords is one of the major benefits for fighters.  I feel like allowing them for all three classes undercuts fighters significantly.

Gypsy Sayings & Chance Cards: These detail various methods Arneson used to determine future events in the campaign.  The first is a random chart of gypsy sayings, most of which are vague, although a few are campaign specific.  The second is a table of "legends", which is little more than a list of artifacts or treasure hoards and their locations.

The third is of more interest: chance cards, which are listed here in chart form.  Each card details an event that will happen in the campaign; apparently Arneson used to draw out a year's worth of cards to plan for future occurrences.  There are things like raids, migrations, uprisings, storms, earthquakes, plague, etc.  There are 35 results, although quite a few are variations on the same thing; with a bit more variety I could see this being very useful indeed for planning out how events in the area will progress independent of the actions of the PCs.

The Original Blackmoor Magic System: This is a brief section on Arneson's magic system, which sounds similar to that used in D&D, with magic-users preparing their spells ahead of time and requiring material components for each casting (which came in with AD&D, but was notably absent from OD&D).  Constitution also seems to be a factor in Arneson's system, with some casters being unable to function due to fatigue.

This is followed by some  magical items, all of which sound rather technological.  One of the items is called a tricorder, just to leave out any ambiguity. This is in keeping with "The Temple of the Frog", which had a technologically armed villain running things.

Special Interests: This discusses some ways that PCs can find to spend their money, as well as the way that Arneson's XP system worked.  Characters could hoard their wealth to earn XP, but if that wealth was stolen the XP would be lost, and the PC would potentially lose levels.  The only sure way to earn XP was to spend money on wine, women, and parties.  XP can also be earned for fighting monsters, but only if their was a witness to the deed who can spread your renown.  Extra points can also be earned on spiritual quests or religious experiences.  The final thing that can earn XP is spending money on your PC's hobby, whatever that may be.

Svenson's Freehold: These are maps of the keep owned by Greg Svensen's character, who is 15th level at the time this book was written.  It's noted that two other characters reached 20th level, which earned them "a free dinner, a pat on the back, and a retired character".  Is losing your favourite character really a reward?

The book ends with a real mish-mash of stuff.  There are some house rules from one of Arneson's players, some details about the swamp area Loch Gloomen, and rules for various D&D monsters.  It's all a bit piecemeal, and there aren't any startling revelations in there, so I'm going to wrapthis up.

First Fantasy Campaign is a weird product, cobbled together from bits and pieces of Arneson's campaign with no particular rhyme or reason.  I struggled to follow a lot of it, as Arneson does nothing in the way of a gentle introduction.  Honestly, I think I could have learned more about Blackmoor with a couple of hours on Google.  There's some good material in here, though, especially the maps.  The rest is hidden under mounds of other stuff though, and I'm not sure I'd recommend this one to any but the hardest of hardcore Arneson fans.

NEXT: Well, unfortunately there may not be a next.  For personal reasons I'm taking some time off from the blogging grind - I would have done so earlier, but I didn't want to leave First Fantasy Campaign half-finished.  Will I be back?  I'm really not sure.  Blogging takes up way too much of my time, and I definitely need a mental break from it.  If I miss it, I'll be back.  If not, I guess this is where Save or Die! comes to an end (although I'll probably still post here and there in any case).  Thanks to all of my regular readers, I hope you got some small measure of entertainment from what I was doing here.  If you want to keep in touch, I'll still be on Twitter, @NPMahney.
Posted by Nathan P. Mahney at 3:48 AM