The Judges Guild Journal (designated I for "initial") consist of two pages, and is written mostly from an in-universe perspective. Bob Bledsaw is given an alter ego as Maed Makistakator, a noted sage, while Bill Owen's alter ego is Llangewellen the Blue, who dwells in a tower. The two of them share an ogre servant named Woody. The segments, in brief, are as follows:

Jocular Judgments: An introductory paragraph, explaining that the JG material is intended to supplement your personal D&D game, rather than supplanting your own creativity. There's a little bit of DM advice thrown in, mostly about not giving away too much treasure. The DM is advised to be "cheap, strict, limiting and friendly" which I feel actually sums things up pretty well if you're condensing things down to four words.

Scrolls from the Archives: Written from the perspective of Chancellor Seneschal, Archive Archon, which pretty much just exists to introduce the two alter egos of Bledsaw and Owen.

Shrewd Slants from the Sagacious Sage: This is Bledsaw's section, written as Maed Makistakator. He begins by explaining that some folks at TSR took them to task about the historical accuracy of the weapons in their Dungeon Tac Cards, and they're planning to have them redone. I wonder if the illustrations were updated for the 2nd printing?

GenCon IX is mentioned, as are Judges Guild's new offices, and apparently there's a poison chart coming in the next issue.

Tips From the Tower: This is written by Llangewellen the Blue, aka Bill Owen, who mostly explains how the Dungeon Tac Cards are supposed to be used. He finishes up by mentioning that Booklet I, with its details about the City State, is just a taste, and that the full 40-page book will be coming in December.

There's not much for me to glean for my campaign from this, though I'll use Chancellor Seneschal, Maed Makistakator, Llangewellen the Blue and Woody as NPCs in the City State. I might even make their status as writers on Earth canon, if it becomes relevant to the game.

The Ready Ref Charts are simply sheets of paper with some of the more important charts compiled on them for ease of reference. The ones that came with installment I are shown below: 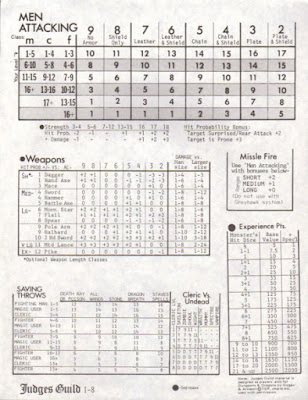 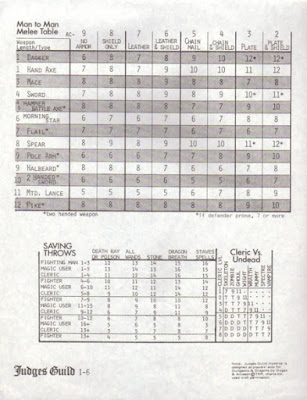 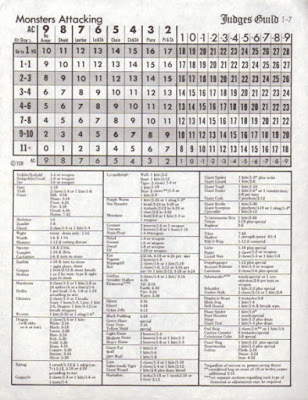 The first sheet, Men Attacking, includes the standard to-hit charts with Strength bonuses noted below (although it's curiously lacking the mods for exceptional Strength), the Weapon vs. AC table, modifiers for missile range, saving throws, and the monster XP values from Supplement I: Greyhawk. The second sheet has the Man-to-Man chart from Chainmail for some reason. I guess there were people who preferred it over the D&D to-hit chart? It also has the saving throw chart that was on the first sheet, so this one seems fairly superfluous. The final sheet has the to-hit chart for monsters, extending all the way up to AC -9. It also has an extensive list of monsters and their damage ranges. As far as I can tell, none of this data is changed from the original rules (although the extension of the monster to-hit charts is an extrapolation that isn't from a TSR product).

These charts would have been useful back in the day, when these charts were spread out across multiple books. In many ways they're the primordial form of the DM's screen, which we've all used at one time or another. The idea was a good one, but the form it's presented in hasn't quite been perfected yet.
Posted by Nathan P. Mahney at 6:08 AM