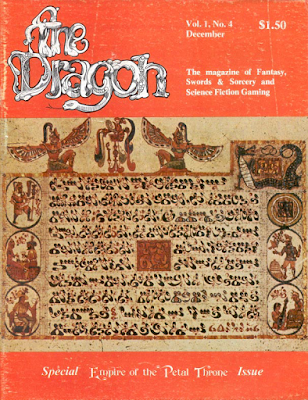 Cover dated December 1976, The Dragon #4 is a special issue devoted almost entirely to Empire of the Petal Throne. It seems like an odd move for a magazine so early in it's run, but TSR was selling EPT at $25 a pop, and no doubt were pretty keen to shift some units. Most of the articles in it were for EPT, and thus only of minor relevance to the Ultimate Sandbox; I do plan to use Tekumel as a setting, but only as a peripheral world that the PCs might visit, not as a central part of the campaign.

Articles not relevant to that project are: "Miscellaneous Oddball D&D Stuff" which presents a number of overtly comedic game elements, which I'm not including because they are very silly indeed; "Mapping the Dungeons" which has more names and addresses of DMs; and "Wizards Defined" which outlines the abilities for various levels of magic-user in an attempt at humour.

Relevant articles are listed below. I'm including them here for my own reference, but since they aren't D&D-related I'll gloss over them pretty quickly. I covered this in more detail some years ago.

"Reports Submitted to the Petal Throne" by M.A.R. Barker: This is a follow-up to a previous article, and features a number of reports to the Emperor about goings on in Tekumel. It's very dense stuff, but an intriguing look into the weird, alien world of EPT.

"Notes on Androids on The Starship Warden" by Jim Ward: An article detailing the history and use of androids on the Starship Warden of Metamorphosis Alpha, which I'm using as another possible setting for adventures in my campaign.

"Jakalla Encounters" by Steve Klein: A random table for generating encounters in the Foreigners' Quarter of EPT's Jakalla.

"The Battle of the Temple of Chanis" by M.A.R Barker: An account of a large-scale battle in Tekumel, complete with the fictional account of one of the soldiers. The battle is waged between an army from Mu'ugalavya and one from Tsolyanu, which the Mu'ugalavyani lost.

"Creature Features - The Mihalli": Stats and description for the Mihalli, a non-human race that hitched a ride with humanity to the planet of Tekumel (back when humans were still a star-faring race). Most of them were wiped out with fission bombs ages ago.

"Creature Features - The Vriyagga": A weird creature that trundles around on fleshy wheels, dwelling in the fabled subterranean City of Red-Tiled Roofs.

"Roads from Jakalla" by Jerry Westergard: Some adventurers are hired to transport a book to the Emperor, to prevent a plot to assassinate a prominent general.

"Wargaming World": Shows some of the earliest miniatures for D&D and EPT. The pictures are quite low quality, but it looks like the orcs are pig-faced (some of the earliest images of that style of orc). The pictures of the EPT figures might come in handy if I need to see what certain types of troops are meant to look like. It's not hard to find visual aids for D&D, but EPT is more difficult.

"Fantasy/Swords & Sorcery Recommended Reading" by Gary Gygax: This is a list of recommended books from Gary, a precursor to the one in AD&D. Some authors have specific works listed, and some dont. I'll list them below.


Of the above, I've only read the first five of Burroughs John Carter books, all of Howard's Conan, a good chunk of Lovecraft, the two Moorcock books, both Tolkien books, and both of Vance's books. Fritz Leiber is probably the most glaring thing on this list that I haven't got to yet. Alas, most of my youthful fantasy reading went on official TSR novels and epic fantasy from the 1980s and onwards. I need to check out some of this stuff.
Posted by Nathan P. Mahney at 6:44 AM