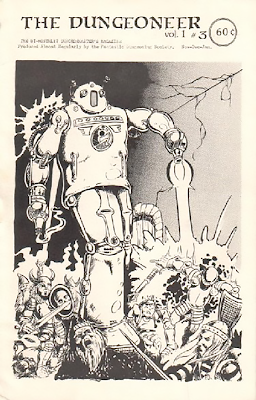 This is the third issue of Jennell Jaquays' fanzine, The Dungeoneer, with a cover date of Nov/Dec/Jan. As usual with Dungeoneer, I'm working with the Judges Guild compilation of issues #1-6, and an online table of contents.

"The Arcane Elders Chapter III" by Jim Ward: In the last installment, the wizard's apprentice Rohcyl was captured by druids and sacrificed with a lightning bolt that left nothing behind. In this chapter, he inexplicably reappears in a subterranean cave where he's captured and enslaved by dark elves, befriends a barbarian named Theoran, and escapes.

Jim Ward has taken over this serial, which makes for three authors in as many chapters. It's possible that it might come together by the end, but at this point it feels very disjointed. The main thing of note is that this features dark elves, well before they are hinted at in the Monster Manual. This variety is small, brown-skinned and dirty, and any bright light will turn them to stone. Whether I apply these rules to dark elves in Judges Guild products or just write these off as an anomaly remains to be seen.

Monster Matrix: It's a monster extravaganza this issue, with a dozen new creatures introduced.


"Borshak's Lair" by Jennell Jaquays: This adventure, apparently at the request of the magazine's readers, is specifically designed for low-level adventurers. I can't be certain, but it very well may be the first such adventure published; every other one that I've covered for this blog has been pretty high level.

It's set in a single-level dungeon that was originally built as a tomb for a fighter named Helmdar, Lord of Hram. Long after Helmdar's burial, a Wizard named Tim the Moonslayer carved out some extra tunnels and used it as his lair. Eventually Tim died, with rumours that he went mad and entered Helmdar's crypt, never to return. The complex filled with monster, but was otherwise uninhabited for about 100 years. Eventually, a band of orcs and goblinoids, fleeing from a war, took up residence, and are there now ruled by Borshak (a 4th level orc fighter) and Grandahg Theork (a 3rd-level orc magic-user). 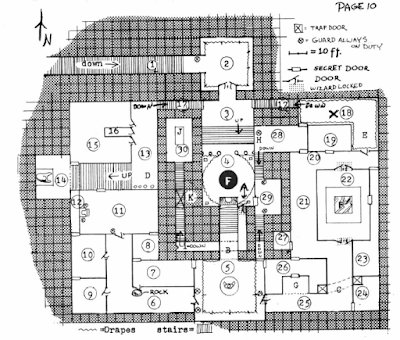 The western areas of the map are mostly barracks for Borshak and his troops, while the eastern portion is what's left of Tim's laboratories, and contains more magical tricks and traps. Room 30 is Helmdar's tomb, which contains the greatest treasure but is guarded by two Spectres (the spirits of Helmdar and Tim). I'd contend that these guardians preclude this from being a low-level adventure, but I suppose the players don't have to go in their if they don't want.

There are quite a few instances in this adventure of spells being cast via magic mouth. There was nothing to preclude this in OD&D, but in a few months the Players Handbook will be released, and the version of magic mouth in that book specifically says that it can't be used in this way. I suppose that Tim the Moonslayer created his own version of the spell, that allows it to function as it does in this adventure.

If I have one complaint about this adventure, it's that it has some crazy amounts of treasure for low levels. That said, the major caches are well-guarded, one by spectres and one by a mummy. I very much doubt that low-level adventurers would be able to clear it out, which makes this a dungeon requiring some return visits.
Posted by Nathan P. Mahney at 12:25 AM