In December of 1976, Judges Guild sent out Installment J, the second of its bi-monthly subscription packages. Included in this packages were the following items:

These maps depict the Castle of Thunderhold and the surrounding wilderness. The judges' map has all of the buildings and features labelled, while the players' version leaves all of these blank. The judges' map also has a dungeon printed on the back, the Sunstone Cavern. More details of these are given below.


This booklet is the meat of the installment, detailing the dwarven citadel of Thunderhold and the nearby Sunstone Caverns (with some other extraneous bits and bobs thrown in). It's only twelve pages long, but as is customary with Judges Guild products it's absolutely jam-packed with content. I'm not sure how much a JG subscription cost, but I'd be willing to bet that folks were getting their money's worth.

Thunderhold lies to the north of the City State of the Invincible Overlord, as shown on the map below:


Thunderhold castle had once been the stronghold of a tribe of men called the Moonrakers, who traded with dwarves who lived in the Sunstone caverns nearby. This alliance was broken up by an invasion of gnolls, led by the evil wizard Lychin and his minotaur/priest ally Bragash, who took possession of the caves and the castle.

Another tribe of dwarves lived in the Majestic Mountains, south of Thunderhold, but they were driven from their homeland by the dragon Ancalegorn and its three young. They moved north, led by Nordre Ironhelm, defeated the gnolls and took control of the Sunstone Caverns (rumoured to have a lode of mithril) as well as Thunderhold. Lychin was apparently killed, but the minotaur Bragash escaped deeper into the Sunstone Caverns. Now the dwarven population of Thunderhold is about 2,000, and Ironhelm maintains close ties to the City State, holding a seat in the senate.

It's mentioned in the book that the dwarves worship Goibhnie, blacksmith of the gods, who is a part of the Celtic mythos in Supplement IV: Gods, Demigods & Heroes. Still on the subject of gods, it then goes on to give this quite bizarre passage which I'll write out in full: "It is rumored that a god called Emig XXV died near the Thunderhold two years ago and gave birth to a mortal named 'Defect'. The mortal and a portion of the dead Emig was supposedly sold to the Overlord for a considerable sum. This rumor was probably started to explain the fire which began leaping from the Cryptic Citadel to kill any flying creature venturing over it since the mortal was also supposed to have inherited a magic limb of Emig named 'Autocannon'. The dwarves have always produced superior weapons but legion blades of recent make are attributed to the corpse of Emig." I'm not sure what exactly Emig is supposed to be, but the hints are definitely there for a race of technologically advanced gods or invaders. And if the Overlord has an autocannon on his roof, I'm all for it.

This is followed by a list of some of the prominent NPCs of Thunderhold, and the shops contained within the stronghold. They're given in much the same abbreviated style as those of the City State, but the shops receive much less detail: only the stats of the proprietor are given, with the type of shop only being written on the Judge's Map.


The Sunstone Caverns are marked to the southwest of Thunderhold. They only cover a single level, but it's a big level, split over three pages in my PDF (although the original was printed on the reverse of the judges version of the Thunderhold map). I've stitched them together as best I can. 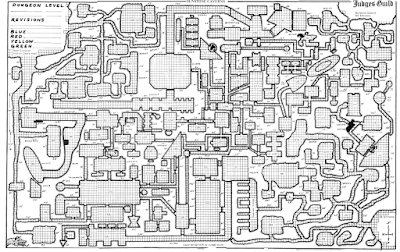 There are a number of factions and other interesting features in the caves, although they're only described in a very broad fashion. The mithril lode (now depleted) is located in the areas to the northwest. The Bandits of the Man-Ape dwell to the west. Their leader Carpen Gartirn is chaotic good, so I assume that they're Robin Hood types, and they have been fighting with the Chaotic forces in the caves. Who the "man-ape" is is unspecified, but Carpen does have a Charisma of 5, so it might be him. Near the centre dwells a white dragon called Gorgomat, who was trapped inside the caves 120 years ago, and is worshipped by gnolls. The middle southern caves are inhabited by a hill giant called Muakruar the Unblest, as well as his family (and their pet hydra). North of that, still near the centre, is the lair of the Minotaur Bragrash, and his ghoul minions. The spectre Zagrath roams the areas to the north-east, seeking his long-lost dog companion. South of that is the Oracle of Bubastis, a large statue which is believed to be divine, but is actually a scam being run by some magic-users. The areas to the southeast are the old Sunstone Mine, and still have areas that can be mined for gems.

(The dwarves aren't mentioned here, so they obviously don't hold the caverns anymore. It's mentioned that nobody ventures in since the spectre Zagrath was first encountered, so it's possible he drove them away.)

The most intriguing area, though, lies to the southwest: the Tribunal of Chaos. This is kind of a court for chaotic monsters, with judges, guards, and executioners. There are various factions vying for control (orcs, wererats, wereboars, trolls, ogres), with the verdicts usually coming down in favour of whichever is on top at the given time. Lots of potential for role-playing and adventure hooks here, especially if the players find themselves captured while in the caves.

The booklet also has a number of adventure hooks scattered throughout. Some are given as legends and rumours that may be handed out by NPCs (such as the Dungeon Vault, a huge cave complex below the Majestic Fastness; the Night Watchers, a group of spectres riding manticores; or the Sun-Driven Dwarf, a flying dwarf adventurer who departed 140 years ago). Others are given as songs or poems, to be used whenever the PCs listen to some minstrel or tavern bard. Here's an example of one:


After the long and cold retreat
The Witch-Queen deigned to take her seat,
By the ancient Sleeping River clear,
Where harpies singing charm the ear.

They're all similarly vague, and the intent is for the DM to take these snippets and craft his own adventure around them.

A recurring segment is introduced called "Malevolent Character Module", which is intended to introduce an NPC or monster that could be the basis for an adventure or two. This one introduces Lady Kostbera the Sorceress, who is a former beggar who ruthlessly carved her way up the ranks of society to join the Black Lotus, the Overlord's personal spy ring.

The rest of the booklet is crammed with bits and pieces that expand on the rules and setting, as follows:

In addition to the Sunstone Caverns, there is another cave dungeon to the north-west of Thunderhold. Four levels of this dungeon are provided as maps that came with the installment, labelled as product JG17. No further details are given for these caverns aside from what's printed on the maps themselves (which is mostly smells and sounds). There are paths that lead down to levels 5 and 6 of the dungeon, but no maps are given for these. There's also a cave that leads to the planet Venus. This is the first level: 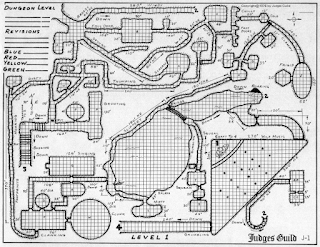 Alas, I haven't been able to find a complete copy of this journal anywhere. All I have is a snippet of the first page, and a very blurry one at that. From what I can gather, it's an article about regaining balance in a campaign that's gotten out of control, by lowering the levels of the PCs, raising the levels of the monsters, or eliminating certain trouble-making PCs.

Like the other Ready Ref Charts, this is a single sheet of paper that summarises various rules for ease of reference.

This chart summarises the surprise rules, and I don't believe it adds anything new. It also gives a chart showing how monster will generally react to a party, based on their intelligence and whether or not the party outnumbers them; this is based on a line from OD&D Vol. 3 stating that monsters will generally attack unless they are intelligent enough to avoid an obviously superior force. A chart is also given showing the intelligence levels of monsters, categorising them as Unintelligent, Semi-Intelligent or Intelligent. Most of these could be ascertained from the monster descriptions already given, but there's definitely been some extrapolation done here by the Judges Guild crew. Guidelines are given for how long certain actions might take, with all actions given in rounds; this is all new material. Rules are also given for whether a creature will believe a Phantasmal Force spell, based on level and a roll of 2d6; this is also new material. Finally, a chart is given to determine who goes first in combat based on the weapon, spell or attack they're using, modified by armor worn and Dexterity. Glances, breath weapons, low-level spells and missile fire are quick, weapons go first based on length, and high-level spells and scrolls are the slowest. How this ties into the already established initiative rules (such as they are) is anyone's guess.
Posted by Nathan P. Mahney at 12:17 PM