Recaps & Roundups part 53: The Dungeon of the Ground Goblins

While I'm on the subject of Games Workshop founders Ian Livingstone and Steve Jackson, I'd like to backtrack a bit and write about a small discovery I made.  First published in Games and Puzzles #48 (cover dated May 1976), "The Dungeon of the Ground Goblins" is a small dungeon adventure written by Steve.  It was later reprinted as part of a D&D flyer distributed by Game Designers Workshop (not to be confused with Games Workshop) in 1977. 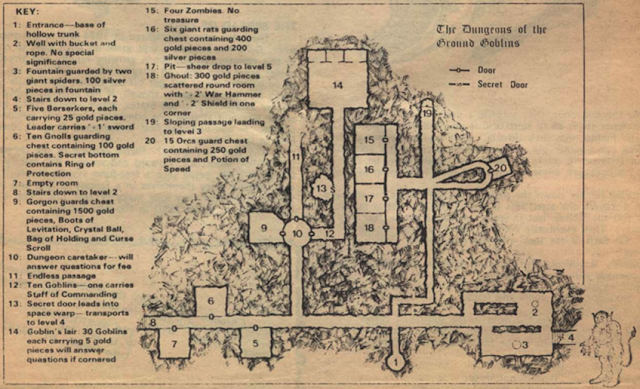 It's a pretty simple adventure: a dungeon at the bottom of a hollow tree trunk, that's little more than a series of rooms, monsters and treasure with little to connect them thematically.  The main point of interest here is the presence of a "dungeon caretaker", suggesting that this whole thing has been purposely designed and curated.  Who by, and for what purpose?  Only Steve knows, assuming he ever came up with a rationale for all of this.  Something tells me he probably wouldn't remember some 40+ years down the track.

Most of this dungeon seems geared to low-level adventurers, with goblins, orcs, giant rats, and weaker undead. The gorgon would be a tough encounter, but having the dungeon caretaker right outside that room could be a way for PCs to find out they shouldn't go in there.  It's pretty heavy on the magic items, too: that haul of a +2 warhammer and a +2 shield is especially rich.

If I ever did use this dungeon for the Ultimate Sandbox, I'd have to design another five levels for it.  I'm tempted to include it, it because I'm a huge Steve Jackson fan.  I'm still mulling over where the Games Workshop-related material will fit in the grand scheme of things.  TSR stuff obviously gets jammed into Greyhawk, and the Judges Guild material is all a part of the Wilderlands of High Fantasy setting.  Some of the White Dwarf stuff goes into Greyhawk and D&D at large via the Fiend Folio, so its likely that I'll decide to jam all the other UK stuff there as well.  Still, it's tempting for me to rope in Allansia from the Fighting Fantasy series, as the only setting out there that I know for sure is created by Ian and Steve.  It's something for me to think about, anyway.
Posted by Nathan P. Mahney at 4:15 AM