Recaps & Roundups part 54: The Inner Temple of the Skeleton King

I'm still stuck on the topic of Ian Livingstone and Steve Jackson after my trawl through their earliest work.  Last time I posted an early adventure from Steve, so now I guess it's Ian's turn.  I honestly couldn't remember where I found this image of "The Inner Temple of the Skeleton King", but a Googling of the filename revealed that it was The Other Side blog, the same place that I found the summaries of Owl & Weasel.  Apparently it comes from part 1 of a history of Games Workshop, but the link to the article is unfortunately dead. 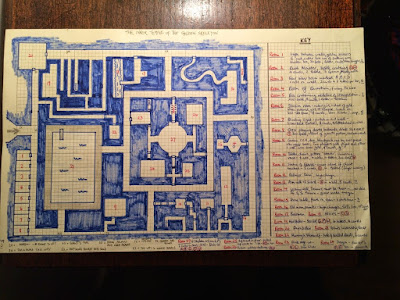 This is apparently Ian's first ever dungeon.  Some of the writing is hard to make out, so it's not 100% clear what's in every room.  From what I can tell, it shares some of the same design sensibilities as Steve's "Dungeon of the Ground Goblins", though not being prepared for publication means that it's not as polished.  A lot of this is written in shorthand, so it's impossible to know what a lot of it means.  What's with all of the letters and cards scattered around the dungeon?  What do the underlined numbers at the end of some entries mean?  Without more levels of the dungeon, or access to the twisted mind of Mr. Livingstone, we'll never know.

It's interesting to see some of Livingstone's tropes already present here though.  If his Fighting Fantasy books are any indication, he loves to put a shop in a dungeon, and this one has a few.  He also loves to make players scavenge for essential items, and I would assume that the cards and numbers found in the dungeon are essential to some puzzle or trap on another level.  I'd love to see the whole thing; this snippet of the dungeon is obviously an early D&D design, with all the strengths and weaknesses that entails.  It has no concept of "monster ecology" or realistic dungeon design, but it does have touches of the anything-goes weirdness of 70s gaming.

This one would take a lot of work to get up to snuff if I decided to include it in the Ultimate Sandbox project, much more than Steve's effort.  I'm on the fence with doing the work for either, but those are decisions for a theoretical time in the future.  For now, I'll file them both away in the "maybe" basket.
Posted by Nathan P. Mahney at 3:07 AM