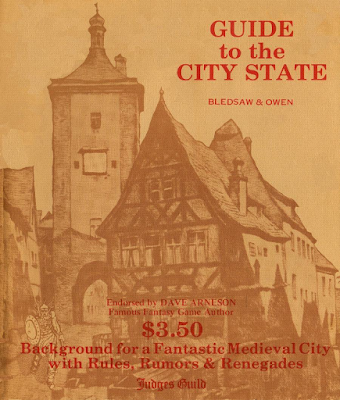 Dropping late in 1976, JG10 Guide to the City State was the follow-up to Booklet I. But whereas that first booklet contained info on the buildings and residents for a handful of streets in the City-State of the Invincible Overlord, JG10 crams its 64 pages with entries for pretty much every important building on the City-State map. Unfortunately it doesn't replicate what was in Booklet I, so a bit of book juggling will still be required to use the full city, but it's so chock-full of content I'm not sure where that stuff would have fit anyway.

I should note at this point that I'm writing this up quite a number of weeks after I finished reading JG10, so my memories of it all are a little hazy. I took some notes, but it's likely I might make mistakes or misremember some things. It's one of the perils of taking a blog hiatus, I suppose.

In addition to detailing the city, this book gives us our first details about the Judges Guild setting, beginning with a couple of maps which I'll reproduce below. 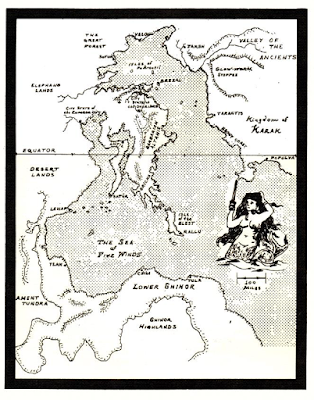 The City-State was apparently founded 1,358 years ago (in the year 3075 BCCC) by a unification of nomad tribes, and has grown so powerful that it only pays tribute to one nation located far in the west (possibly the City-State of the Emperor marked on the map). The barbarian Altanians, who share an ancestry with the people of the City-State, dwell to the south. Thunderhold lies to the north, ruled by Nordre Ironhelm, king of the dwarves.

It's said that over 300 religions are practiced in the City-State. The Overlord allows them all to operate, taxing them all. As in Booklet I, there are actual gods dwelling in the city as well, among them a toad god in the swamp and Balder himself in a wine shop.

The city now runs on an embryonic feudal system, which came into place 456 after the Revolt of Craftsmen, when the craftsmen wrested a measure of freedom from the warrior-dominated ruling faction.

The calendar mentioned above (BCCC) is Balozkinar's Corrected Common Calendar, and was instituted 453 years ago. Balozkinar was a warrior-king, after the discovery and interpretation of an ancient calendar obelisk (I think, the wording is a little vague). The calendar year is split into 18 months of 20 days, with a five or six day celebration at the end of each year.

The obelisk mentioned above, called the Chronology of the Dragon Kings, is shown below: 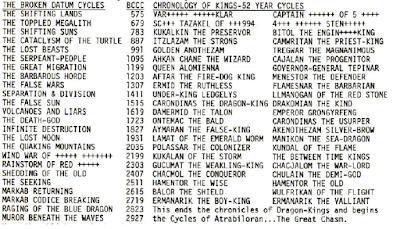 Given the founding of the city state in 3075 BCCC, these kings all ruled well before its existence. It's mentioned that the founding happened precisely 5,466 years after something called the Uttermost War, and supposedly 11,683 years after "the creation" (according to Ralibarn the Wise, a Patriarch of Odin). It's also mentioned that there's a gap of about 2,500 years in the City-State's history, due to the destruction of records on a nation-wide scale, but I'm not sure how that can be, as it was only founded 1,358 years ago. Perhaps that gap refers to the history of the region as a whole, rather than the city-state itself.

With the history stuff out of the way, the book then gets into detailing the streets and buildings, in exactly the same fashion that it did in Booklet I. As before, it's dense and pretty rough going as a read. It's only 65 pages, but it took me a few weeks to get through. The buildings are grouped by street, with each one giving the stats and personalities of major residents, as well as wares offered and treasures held. There's a lot packed in, and just about every building has some sort of a springboard that could be used to generate an adventure.

Of the various city supplements I've read over the years, this might be one of the most practical and usable. My only real gripe is that buildings are often grouped with those on a street that they are a fair distance away from. For the most part they can be found quickly, but there's the odd one here and there that would be very difficult to find without a lot of flipping through the booklet.

The book finishes up with some more charts, with things such as random boons and duties that the Overlord might ask of a noble, lots of charts for determining the looks and disposition of any women encountered (with the possibilities including ones with golden fur and tail, feathers and wings, and scaly half-mermaids), and rules about law and justice in the city-state (including wills, oath-breaking, and proclamations that might be posted in the plazas and at the gates).

The booklet ends with the following calendar, which has 12 months in contradiction to the 18-month calendar mentioned earlier in the book. It's possible that the one below is used by the common folk, with the other being favored by nobles and officials.

From this we can learn the general temperature at different times of the year (in Fahrenheit, seemingly), as well as the names of several of the gods worshipped in the city-state: Modron, goddess of rivers; Mabon, god of the sun; Harmakis, god of destruction; Teutates, god of war. These deities seem to exist alongside pretty much everything from Supplement IV: Gods, Demigods & Heroes. It's also mentioned that month 5 (the Yellow Moon-Dog) is "pardon month", when the Overlord can be petitioned to pardon any crime. Any petitioner not pardoned is often exiled beyond the city gates.
Posted by Nathan P. Mahney at 6:01 AM